At the end of my third year at Edinburgh Art College, my drawing tutor, Harry More-Gordon, told his students that they must return in the autumn with a completed sketchbook. This was bitter medicine for easily distracted twenty-year-olds. I went abroad that summer and by the time I returned I carried with me the results of what would become a life-long obsession: drawing from life. Since my main focus in painting is from the imagination, drawing and painting from life has become an invaluable way to ‘limber-up’. 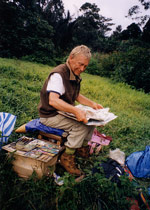 Painting by the Uwutetamo River (22)

I feel lucky to have spent seven weeks in Belo. It is a privilege to gaze back on one’s own society from the vantage point of a quite different one. During five of those weeks, I went painting every day. Visually there is so much to absorb on just one street that I decided from the outset to restrict my movements to the village I was living in. On many occasions, it was as if I were taking my first cautious steps on the surface of the moon, so different was the atmosphere in Belo. That difference in the feel of everything also became my motivation for writing about it.
Reproduced on this site are all the paintings from Belo. The browns were made by mixing street mud with matt latex.

Painting 3 Corners (3) in the rain

Funnily enough, in Belo I was often cast as a ‘painter spy’, out on some secret mission to paint a local restaurant or petrol station. “Wouldn’t a camera make more sense?” I thought.
Another frequent speculation was that a European painting from life was certain to sell his finished paintings for huge sums of money back home, and if there happened to be an owner of what I was painting, they often dropped hints hoping for some kind of compensation. The idea of developing a skill that doesn’t have guaranteed financial rewards fails to fit the image people have of the West, and improbable stories therefore have to be invented. So there I was at the side of the road mixing paint, mud and latex while some locals imagined me as a painter-millionaire or secret agent.
If painting from life was wounded by the invention of the camera 150 years ago, then it is now in a state of rigor mortis. Few people do it nowadays, which is a bit strange since neither the real world nor our visual cortices have changed much in the intervening years. Nowadays people carry a camera around with them 24 hours a day on their mobile phones and can pop home to ‘paint’ their images in Photoshop whenever they like. I shall continue to draw and paint from life because I enjoy it so much, find it a challenge and endlessly learn from it. It also pleases me that the results can be appreciated by most people. Perhaps it’s a bit like riding a horse after the invention of the car. Why not? 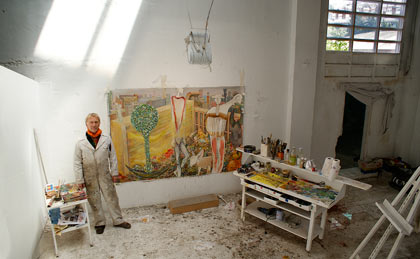